One of my favorite projects I have the good fortune to be contributing to was created by the US Department of Homeland Security Science and Technology Directorate (DHS S&T – the equivalent of the R&D arm of the agency).  It’s called the HOST program (Homeland Open Security Technology).

Joining me at the upcoming Palmetto Open Source Software Conference (POSSCON) on March 22-29 will be my HOST colleagues from  DHS, Georgia Tech Research Institute, OSSI, and other government experts like John Scott (most recently co-authored “Open Technology Development: Lessons Learned & Best Practices for the Military”.

The program does a number of things, but the main thrust is to help get open source cyber security tools in to the hands of federal, state and local agencies wherever it makes sense. The path that leads there includes creating some useful educational tools and making small, strategic investments to help make that possible.

Columbia, South Carolina serves up big heaps of southern hospitality to conference participants every year.  This is my fourth year to make the pilgrimage there.  If you can attend, I promise you won’t be disappointed.  And if you do, please come say hello.

Following the first year of implementation of the Open Government Directive, a number of valuable reports have addressed the openness and transparency progress made by federal agencies. Today’s Open Source for America (OSFA) report card digs a little deeper into its own domain – Open Source, Open Technology in use in their report on Federal Agencies.  Although the US White House Open Government Directive isn’t explicitly about underlying technology to “get to open”, it’s not gone without notice that open source software drives much of the infrastructure that makes the process work.  I like to think of it as a kind of  Swiss Army knife for open data and transparency.

But read the report, it’s all in there. Read the press release.

According to the release…

The Federal Open Technology Report Card evaluated key indicators of open government and open technologies developed through online crowd sourcing and refined metrics outlined by the OSFA leadership committee. These included questions regarding public budgets, use of social media, and open source technology practices. 2010 marked the first year federal government agencies were operating under the Directive and Open Government Plans, and the results are promising. Many of the agencies scored well, while others have room for improvement. The Report Card assigned a percentage grade to the 15 Cabinet-level departments and agencies use of open source technologies, open formats, and technology tools for citizen engagement.

A few of the agencies graded in the report include:

Open Source for America is one of the projects I enjoy working with.  It’s an all volunteer organization, so any time we can beg borrow and borrow our community members’ time to produce a report, it’s something to celebrate.

It’s true.  After five years of operation of the Government Open Source Conference, we’re looking forward to recognizing government employees who have made significant accomplishments in the application of Open Source Technology to meet government business or mission requirements.

To nominate a government employee or project, visit http://www.goscon.org/awards for information and an on-line submission form.  Deadline is Friday Oct 23 2009.

Not too long ago I attended TransparencyCamp in DC and led a discussion on how to work with government.  The session was intended for technologists and advocates. I was pleasantly

surprised to find one of the participants was a senate staffer.  After listening to much of the discussion she explained that she had worked on a bill that included a

role for open source software which eventually failed to move forward.  Her question to me:  why was that no one from the open source community stepped forward or offered to help answer questions.  Where were they?  Her question gave me pause.

Several moths later, the cavalry has arrived.  Along with the town crier, the

librarian, the community manager, the mayor and a cadre of plumbers.  The newly formed coalition is “Open Source for America”, and I’m pleased to have bee

t of its founding effort.  Read more at the association web site. 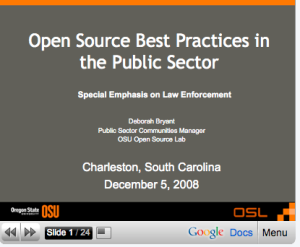 Last winter I received a request from the US Department of Homeland Security’s Office of Policy to come Charleston and meet with a group of innovative law enforcement execs. If you belong to the public safety community or are interested in how governments are making collaboratives work, a copy of my presentation is viewable on google from this link:

Matsue City is a beautiful and remote city located in the Shimane Prefecture of Japan. The region has drawn national recognition for the Matsue “Ruby City” project, a highly innovative initiative to promote open source software through a collaborative partnership created by local industry, academia and government.

I was very fortunate to have been invited to participate in a number of events in early February to help share what the state of Oregon, industry, government and the Open Source Lab (OSL) has learned though its years in supporting the growth of the Open Source Community. The visit included meetings with Shimane University’s President Honda; Matsue’s mayor; Shimane Prefecture’s governor; keynoting at a seminar for industry and government; addressing the 37th Open Source Salon of the Open Source Software Society Shimane; spending time with colleagues from Japan’s IPA Open Source Lab (their national referendum on OSS); National Applied Communication Labs and Mr. Inoue and Matz; touring historic and scenic sights in Matsue – a beautiful blend of historic and traditional architecture and modern as well – and enjoying many wonderful meals courtesy of my hosts.

Many thanks especially go to Mr. Doi from the City of Matuse, to Mr. Noda of Shimane University, and especially to Mr. Tansho my host and translator – and of course to Shimane University which sponsored my visit. The dedication of these three individuals to this project is amazing as is the commitment of everyone I met from all sectors – education, private industry and government.

BTW plans are underway for a “Ruby for Business” conference fall of 2009 in Matsue, drop a line if you are intersted in talking with the organizers.

I have not been tracking  Oregon’s Health Record Bank (HRB) project closely the last several months after it slowed progress, but current documents are now available for this project.  Oregon’s Department of Human Services Office of Medical Assistance Program (DHS OMAP) was granted $5.5mm as transformational technology in 2007.  Open source technology and Oregon’s local resources and domain expertise where named in the original grant proposal.  I think this is an important project because it distinguishes itself from most other HRB projects in that the information is patient centric.  Under the proposed approach, the patient, not the provider, is the owner of their own medical information.  Score one for  individual information rights, with a difference that can truely mean life and death.

The project was scheduled to let a Request for Proposal (RFP) this month, February 2009.  Oregon’s DSH has a big challenge on their hands as they must consider the simultanious replacement of their thirty year old (yes – 30) Medical Management Information System (MMIS) at the same time, presenting both an opportunity and a challenge.  More information is available at the official project web site.