I recently returned from the Thirteenth International Forum for Free Software (FISL) in Porto Alegre Brazil.  With an attendance of about 8,000 this year, it is the largest tech conference in South America and likely the largest free/open source conference in the world.  I was fortunate to have attended representing OSI and presented a keynote on free and open source software and its civic and social impact around the world, and a second session on Economic Development.

The Brazilian government – with great grassroots support – was a pioneer in the use of free software as an economic development strategy, and also to bridge the digital divide by lowering the barrier to access to technology.  Today the government’s involvement has shifted in some respects, and community leaders from a number of Latin American countries are debating in general the pros and cons of government partnership in their FOSS initiatives.

The “Hacker Bus” project – pictured above behind myself and colleague Paulo Mierelles from the University of Sao Paulo FLOSS Competency Center – really impressed.  Getting technology and “Hacktivism” out into undeserved areas makes for a fantastic program.
You can read more about the project on The Next Web  published during last year’s conference.

First the musings: Because I’ve been involved with open source adoption in Government nearly since Al Gore invented the Internet, I get a lot of questions about what the White House is thinking about Open Source.  Joking aside, this has been present on people’s minds since the new administration took office.  For those familiar with some of the appointees’ backgrounds, there was a hope that open source software would play larger role in Federal IT.*  People got very excited when the White House web site moved to Drupal.  I thought it cool too, and accepted that as a sign of more flexible thinking.  At the same time, having run a technology policy office (at the state level) earlier in my career,  I understood that moving a web site to an open source Content Management System did not constitute a major break-through in a complex IT acquisition environment where the greatest savings and efficiencies remain in larger investments in software development for systems unique (if not common within) government.

On to the news: Yesterday’s United States Office of Management and Budget (OMB)  memo entitled “Technology Neutrality” and signed by the US Chief Information Officer Viveck Kundra is a balanced and inclusive expression of options the feds should consider when procuring information technology.

“…agencies should analyze alternatives that include proprietary, open source, and mixed source technologies. This allows the Government to pursue the best strategy to meet its particular needs.”

Even with its quiet Friday release, it has been reasonably well-covered by the press, along with a bit of speculation about “why now”.  You can check out some of the coverage at NextGov TechInsider, GovFresh, and FedRadio. Classically, the new media folks touched on implications for open source while Fed Radio’s take on the memo was “a reminder not to use brand names in their procurements.”

I’ll just take this as a win for a more balanced view, now institutionalized as advice to Federal CIOs.

What’s next?  I want to hear more about how the GSA may use use an open source cloud solution for that new forge.gov project.  We all have our wish lists, that one is high on mine.

* Viveck Kundra and Aneesh Chopra had extensive experience with open source in their respective roles prior to joining the Obama administration.  See Kundra’s GOSCON 2008 Keynote presentation “Open Source as a way of Life”. 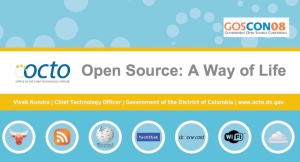 The conference will  include one day of intense GOSCON program content, exciting keynotes, lightening-round sessions, rich opportunities to network with peers.  Topics include:

Speaker Guideline and online proposal forms are availlable through the conference Call for Speakers page.

Quantifying what the rest of us have known intuitively for some time; more than half US agencies have adopted some form of open source software, according to a Federal Open Source Alliance (FOSA) survey just released.

The top rationale for not adopting open-source software was organizational reluctance to change, according to the survey. This reflects my experience in early forays into the desktop arena in Oregon, as an example, where a pilot in a large agency netted positive technical and cost results, but management was dread to manage the inevitable reaction to change by personnel, trumping other benefits.

If you are interested in the base-line survey conducted by the FOSA, which is an industry partnership of HP, Intel and Red Hat, you may…